Mushishi Episode 6: Zombifying Dope Flowers Are A-OK if They Make You Happy

I'm rewatching Mushishi on DVD and blogging it. Previous post here. First post here. You can watch this episode and the rest of the series legally (and free) on Youtube here. List of brief episode descriptions here.

Since deciding to do this post series, there have been a few episodes I've been really eager to get to (and a few I've been dreading). Those Who Inhale the Dew (this episode's proper title) is one of those. In truth I'd forgotten how early in the series this appears; I recalled it happening after the halfway point, so I was quite surprised to see it on the first disc. I was a little shaken, too, since I remembered this being one of the ugliest (and I don't mean visually) entries in the series.

Turns out my memory was correct. 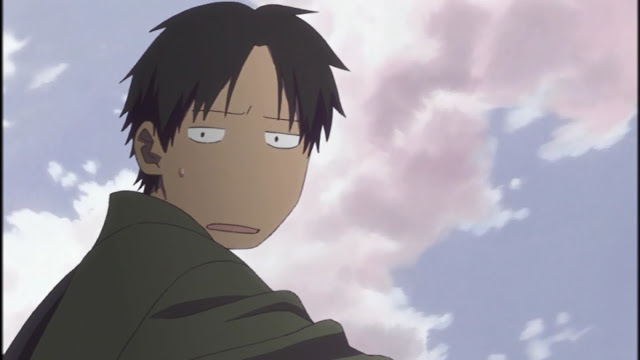 I can't recall many moments in Mushishi where humans commit, or threaten to commit, violence against another human. Jin's confrontation with Ginko about the true nature of the Imeno no Awai in episode 4 was certainly tense, but Jin quickly calmed and nothing really happened between them. I can think of two or three other episodes with significant human-to-human tension in them (episodes 23 and 24, specifically), but only one in which someone makes an active attempt to kill another human, an attempt that ultimately fails.

In this episode, a scam artist is lynched by hoe-wielding villagers who leave his broken, bloodied body on the shore where it is found by his daughter

It's this theme - one of purely human interactions, with minimal interference from mushi - that sets the tone for the episode. The problem that's really being cured isn't one involving any mushi, but one of human deceit and desire for power. The two major conflicting forces in the episode (Nagi & Ginko, and the headman) have their actions and goals permeated by a decidedly gray brand of morality, in stark contrast to the black and white, survival centric outlook the mushi typically exhibit. In that sense, this may be the most "human" episode of Mushishi.


Let's talk about moral ambiguity first. In one of the very first scenes, Nagi mentions that the "living god" (or rather, its falsely touted healing powers) provides people with emotional support in the same breath that he says it must be stopped. One could certainly debate the improvement his actions bring (though not terribly effectively), but Ginko has always been portrayed as a healer. Saying he's going to be depriving an entire island of something that helps keep them happy is surprising enough, but even more so when mentioned before he's even started to investigate the mushi. The headman's murder is also rather questionable (though is also committed by neither Nagi nor Ginko). Yes, what he was doing was clearly unfair and wrong, but did he really deserve to die for it? I suppose there's a certain comeuppance to it, given that he'd just ordered someone to kill Ginko and Nagi, but it still just feels so ruthless, so. . .bleak.

The most explored idea in the whole episode, happiness, is also presented as one without a single, entirely correct answer. Akoya's life is largely out of her hands when she's afflicted with the episode's unnamed mushi, to the point that she seems to lack a will of her own (and indeed, her awareness and ability to think were quite impaired, as she explains to Ginko). It was an existence she has little to no control over, in which she couldn't really focus on or think about anything, but was supposedly extremely satisfying. When Nagi restored her senses, he did so thinking he was rescuing her from a horrific fate. Perhaps it was, in his mind or in ours (I certainly wouldn't want that kind of life). What's important here is that Akoya didn't think so, and who could blame her? In the few days she was "cured" of being a living god, she had to lie to her family, pretend to be something she wasn't, and see her father killed. Whether her inhaling the mushi once again was an escape from this, or if it truly was the life she wanted, the point remains the same: for Akoya, being a living god gave her life joy. That, more than any other single idea in the episode, seemed to be the strongest: there are many forms of happiness, and we can't choose others' for them.

A few other notes:

Ginko stayed on the island for a good sixty days, which I believe marks his longest stay in one place for the series. More notable is that he spent twenty seven of them in hiding with Nagi, most of them spent researching.

As is mentioned at the end of the episode, Akoya wasn't the only one to go back to being a living god. In fact, according to Nagi, at least one person went back every time the cave was exposed (i.e. every month). If we assume that statement holds true, eventually every person Ginko cured this episode undid his work. In other words, he spent quite possibly the longest time researching a cure, administered it to more people than we've ever seen afflicted (an entire group of outcasts on the island, compared his usual single patient), and not one of them accepted it. Something to think about.

I'm not sure I can say what the ultimate point of making such a "gray" story was. Perhaps it was a commentary on the nature of life; there are both good and bad parts of being human, but if we focus on finding our own happiness things will be okay in the end (as they ultimately were for Nagi's village). Perhaps it was instead part of a more nihilistic message, though I'm not sure how convinced I am of that. Whatever the case, it was prominent enough to mention.

One noteworthy way to look at the episode is through Nagi's perspective. In a way, this is really his story - taking revenge for the false beliefs that failed to save his mother, trying to open everyone's eyes to what's really happening, and saving Akoya. In failing that third goal, he completes his own little contained arc by realizing and accepting that there are different ways to be happy, thus seeing that Akoya didn't really need saving at all.

The last thing I want to bring up is Ginko's stated reason for siding against the headman. He says they were "abusing" the mushi and that he wants to stop it, but seems to be perfectly okay with villagers going back to being living gods. This clarifies his position greatly. Ginko isn't trying to return every abnormality he finds to its normal state, but instead merely attempts to find the proper balance. If your happiness lies in what you gain (and lose) by co-existing with the mushi, that's fine, so long as you don't abuse them.
Posted by J. Sato at 9:30 AM